Posted on September 12, 2019 by exetergateway

This week has seen members keeping themselves very busy as usual-there has been the usual cooking (making muffins from the glut of courgettes!), papier-mache creations, bingo, dominoes and computering to name but a few!

Peter has kept the staff busy with his turn-over of picture frames and Gareth has shown great patience with his police vehicle (he’s now making a fire engine!). As usual, Scott has shown his proficiency on the PCs, copying and printing an array of pictures to go on his many creations.

There has been a birthday celebrated as well, but unfortunately Alan’s date wasn’t in the book, so rather than a large sponge cake, he made do with a muffin and one candle!

Thanks to the Exeter Rotary Club, we were able to purchase a new work-bench for woodworking and craft. Under the supervision of Daryl, Amy and Gareth helped to put it together. There were no instructions in the box, so after some discussion, the correct decisions as to where bits and bobs went were made, and we now have a new bench! 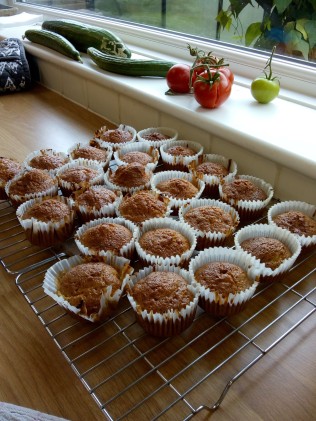