Over the past few weeks, members have been designing and making casings for a small battery operated clock. This has proved very popular with an array of ideas being planned and created. Jamie brought in one of his Eddie Stobart lorries (a toy one!) to base his clock on, and Peter K adapted one of his Doctor Who creations into a storage box and clock for his mum. Other designs include Paul’s Stagecoach bus, David’s Shakin’ Stevens and Scott’s Elvis themed clocks. There are still several members who will be finishing theirs this week. 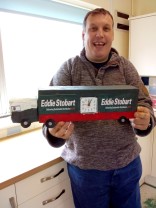 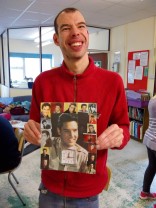 On the birthday front, Lisa celebrated ‘The Big 40’ and was treated to a magnificent rendition of Happy Birthday, a cake and card too.